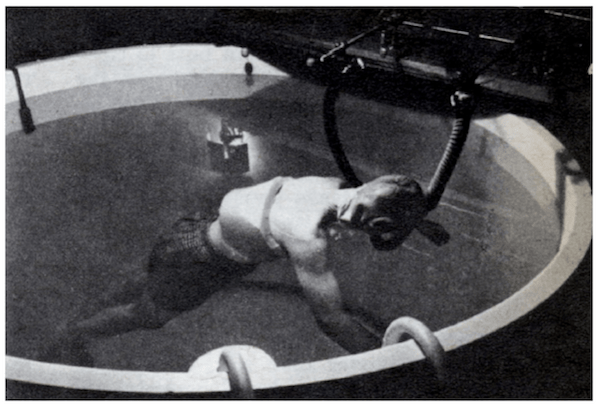 At the very beginning of the Cold War, isolation was central to American anxieties. A genre of popular articles, published in the early 1950s in Life and The Saturday Evening Post, made heroic, masculine figures of radar operators stationed in the remote Arctic along the Distant Early Warning Line, watching for the earliest signs of Soviet attack. Threatening to undo this emergent regime of attention, however, were problematics of isolation and monotony — what psychiatrist Woodburn Heron referred to as “pathologies of boredom.” The vigilance of the radar operator might be undone not by a surfeit of stimuli but its very absence. As the U.S. pursued its high technological Cold War strategy, enveloping the global stage in the glow of a radar screen, these concerns indexed the limits of the subject in technoscientific modernity.

At the height of the Korean War, a series of public trials held in China led to shocking confessions of war crimes by American prisoners of war. For American leaders, these confessions were evidence of sophisticated methods of interrogation and persuasion employed by communist forces— what became known to a scandalized public as “brainwashing.” In response to these fears, intelligence agencies began to fund and direct research agendas in the human sciences through a variety of front organizations, a program that likely continues today. These projects were intended to mimic and surpass communist means of brainwashing and produced a wide range of techniques for the remaking of the subject, mapping Cold War conflict onto the psyche itself.

Between these parallel concerns with the infrastructural and ideological attunement of the body emerged scientific interest in “sensory deprivation.” Funded by NASA, the Air Force, and, surreptitiously, the CIA, research on sensory deprivation was a short lived sensation, flourishing between 1952 and 1967 and capturing the attention of a wide range of Cold War mind/brain scientists. Sensory deprivation projects across North America immersed research subjects in a limited and monotonous perceptual environment through a variety of experimental apparatuses— eyes covered with opaque goggles, limbs encased in weighted tubes. Exiting the apparatus, subjects were disoriented, suggestible, malleable. For scientists, sensory deprivation was imagined as a breakthrough in understanding the neurophysiology of monotony. For intelligence funders, sensory deprivation became one of range of techniques deployed to “destabilize” captured enemy combatants.

The body in isolation acted as a scientific model of the prisoner of war, the radar operator, and, for some, the thinking subject itself. Although best known for his later work in interspecies communication with dolphins, neurophysiologist John C. Lilly, pictured here, first came to prominence as sensory deprivation researcher, utilizing a surplus water tank and an aviation breathing mask smeared with tar. In a cannily Cartesian move, Lilly repurposed sensory deprivation into a technique of self-observation, using the tank as an ostensibly objective medium to observe his own psyche and draw conclusions about the nature of the mind itself. The sensory deprivation apparatus mediated, and thus materially constituted, the interiority of the subject— as the locus of observation and as a front in the Cold War.