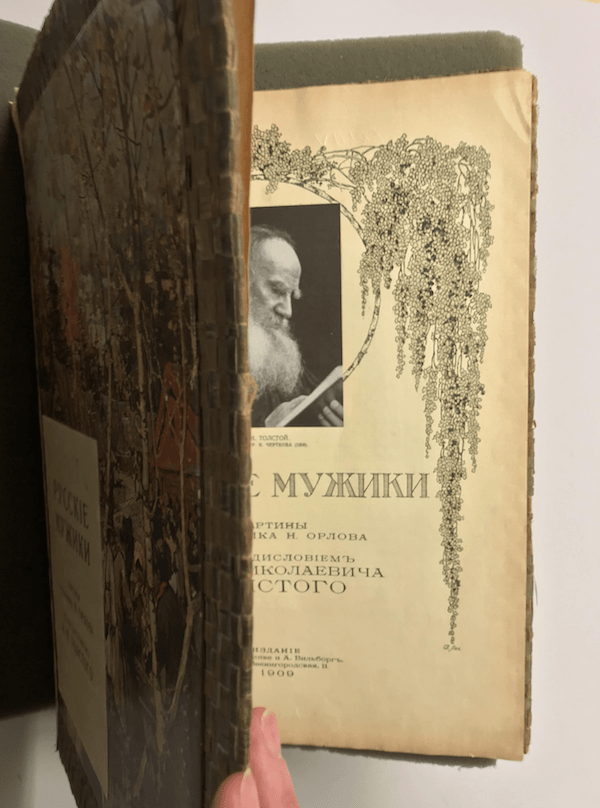 Nikolai Vasil’evich Orlov’s book of paintings Russkie muzhiki (Russian peasants, 1909) has a bast cover of woven tree bark that initially confirms the stereotype of the late Russian Empire as backward and begging for revolution, but quickly convinces viewers of its modernity. Held in the Rare and Manuscript Collections of Cornell University’s Carl A. Kroch Library, Russkie muzhiki is co-authored by Orlov and Leo Tolstoy (1828-1910). Unlike the cheap and mass-produced books distributed by Tolstoy’s camp at the time, Russkie muzhiki is a multimedia embodiment of the agrarian society that its two authors studied. The cover’s basket weave references the lapti that Russian peasants continued to wear in the twentieth century, while the book’s contents hint at the potential for collective action.

Tolstoy, who according to Olga Ershova expressed embarrassment over his portraits’ popularity in the mid-1890s, is photographed as the frontispiece of Russkie muzhiki. In the six-page introductory essay, Tolstoy celebrates Orlov as his favorite artist because he captures “the persistent Russian peasant people, who defeated Napoleon, conquered and subdued other peoples, and are not the same people who, unfortunately, soon learned to make cars, railways, revolutions” (3). The text then describes the content of Orlov’s nine genre scenes, each of which pictures groups of people encountering the severe hardships of peasant life. Orlov’s paintings critique the imperial government, Eastern Orthodox clergy, and emerging middle classes, leaving the Russian peasant as the empire’s only hope. Although the paintings display more despair than hope, several images have a figure looking out at its viewer, prompting the witness to act.

Tolstoy promotes Orlov’s mimetic abilities while paying little attention to the artist’s style, vision, and other details of his practice. Similarly, the photo reproductions of Orlov’s works are low quality, dark, and lack the professional lighting techniques that effectively render Tolstoy’s profile in the book’s opening image. Orlov’s paintings are reproduced so ineffectively that they constitute what Hito Steyerl describes as the “poor image,” where a lower resolution can imply “a castration of the author” (2009). Orlov’s images also compete against a cropped color reproduction of a painting by Stepan Kolesnikoff (1879-1955) pasted on the book’s woven cover, which provides a close-up view of thickly-applied paint and textured brushstrokes markedly different from Orlov’s.

Russkie muzhiki also cites two other artists, with the signature of A. Leo below his style moderne ornament surrounding V. Chertkov’s portrait of Tolstoy. Despite Tolstoy’s claim to celebrate Orlov’s oeuvre, Russkie muzhiki shows little concern for the painter’s work beyond its narratives of peasant life. The cover’s tactile qualities take readers into the peasants’ physical world of corporal punishment and other forms of physical exploitation, and the limitations of Orlov’s reproduced paintings force viewers to imagine beyond the visual representation. Russkie muzhiki obscures Orlov to stress the community and peasant virtues outlined by Tolstoy’s text.

Ksenia Pavlenko is a PhD student in the Department of Art History and Visual Studies who works on image-making in the late Russian Empire with Professor Andrew Moisey. Her research analyzes visual culture against photography's instrumental role in imposing imperial control.