Photograph of a Paperback on Tumblr 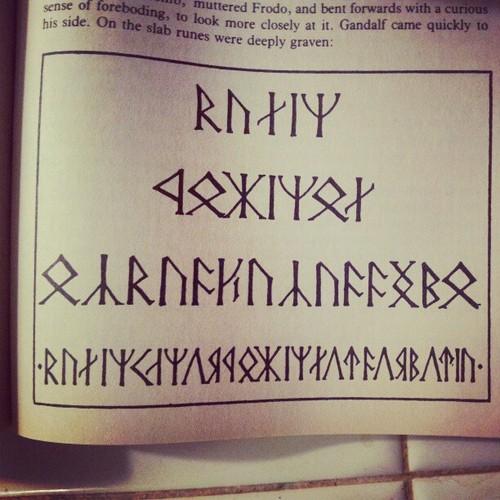 This photograph, of a page from J. R. R. Tolkien’s The Lord of the Rings, was posted to the social media platform Tumblr with the tag “#lotr.” A brief search for that tag yields photos depicting a broad range of media, all announcing their posters’ connection to this narrative: tattoos in Elvish and graffitied doors of Moria; homemade lembas and commercial wedding cakes; DVD boxes and video game screens; cosplay and pencil sketches; digitally rendered memes and snapshots of TV screens.

This photo, against a homely background of tiles, shows a page on which Tolkien’s own use of transmediation appears, from long before the emergence of rock songs and tabletop games based on his book, let alone film and merchandise tie-ins. “On the stone, runes were deeply graven”: runes have the shape they do to facilitate carving in stone, but Tolkien invented this runic alphabet for mass reproduction in print. The snapshot, however, is not itself a reproduction in the sense that the paperback is; it bears the indexical quality of the photograph. As Kris Paulsen has shown in her reading of C. S. Peirce, the indexicality of the digital photograph resides in its deictic quality as a sign, the way that it connects the receiver to the object via speculative reconstruction, through narrative. In this case, we infer that a reader took this snapshot, at home, and connected it publicly via social mediation, an act enabled by another narrative, a shared mass cultural fantasy.

Peirce distinguished three semiotic categories—the icon, the symbol, and the index—which corresponded to his three categories of reasoning—induction (the icon signifies by resembling its object); deduction (the symbol signifies through a logical system); and abduction (the index signifies through a type of speculation in excess of the evidence). The Lord of the Rings should be—in a phrase grossly appropriate to the mass cultural context—iconic: what it represents does not exist. Peirce writes that “in contemplating a painting, there is a moment when we lose the consciousness that it is not the thing, the distinction of the real and the copy disappears, and it is for the moment a pure dream.” This not only describes the literal character of fiction but suggests the particular absorbing hyper-fictionality of mass cultural fantasy.

But mass culture depends on mass participation, on as many as millions of people adopting, adapting, satirizing, exploiting, altering a narrative. My questions are these: how should we theorize transmedia narrative in relation to digital photography and social media? What does it mean for fans to consume and re-present this narrative through such a wide variety of media, and then to photograph those media and share them, publicly, on a platform like Tumblr? What kind of sign is this photo? What does it represent? Is representation its purpose?

Jane Glaubman received her PhD from Cornell in 2019. She seeks employment.