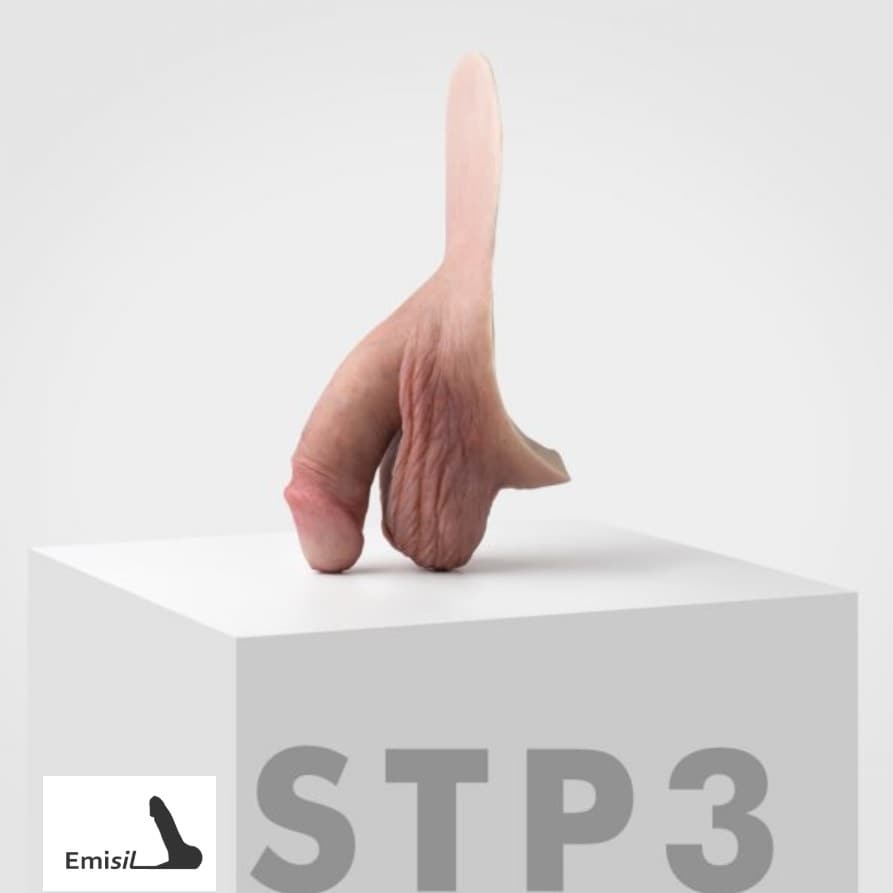 A certain kind of prosthesis called a “packer,” worn by transgender men to replicate typical male genitalia, is a media object. A packer transmits a deliberate declaration about the shape of the body to broadcast a corresponding identity, and as media studies tells us, communication happens when an intended message is accurately received. Whether the recipient of the signal is another person or a mirrored reflection, the packer is both a technological apparatus of communication and the information itself.

Conventionally, a prosthesis is an artificial device substituting a missing body part. While this substitution suggests a deficit, prostheses are equally “artificial” and “body part,” and so, they trouble boundaries that are expected to be ontologically fixed, like flesh/machine, absent/present, or real/fake. Understanding a packer as a “fake” penis coincides with fragile conceptions of what makes a “real man” and, of course, media’s continued tendency to depict trans people as imposters. For trans men, the materiality of packers, the image they create, and their various designs and functions communicate a relationship with maleness that can be integral to alleviating dysphoria. Though this object-mediated relationship can also risk exacerbating dysphoric trauma when the wearer is reminded of the packer’s object-ness, the overall enhanced aesthetic and utility the packer provides make that risk worthwhile.

Some consider prosthetics concealing and compensatory disguises, and relatedly, some have decried trans bodies are just crude facsimiles of the “real thing.” To reference Sandy Stone, prostheses for trans people are extensions of the will, and they mediate history more honestly than the supposedly “true story” of the body-as-assigned. Rhetoricians have identified the theoretical possibility that phallic genitality is transferrable through other accoutrements, but phallic transfer, beyond theory, has gone unrecognized as a “prosthetic reality,” to use Vivian Sobchack’s term, for trans men. Packers materialize and externalize sexual and other functional specificities of penises, producing a new sense of bodily integrity. Constructive imagination is required, and although prosthetic use is to some degree an illusion, it is not a delusion.

Trans people have long been deemed fantasists and frauds based on the mistaken belief that so-called “real” sex and/or gender is empirically verifiable. “Realness” prescribed by sex assignment invalidates trans prosthetic users as pretenders or fetishists playing with (sex) toy doll parts. But our remodeled sensorial experiences do command elements of fantasy to expand bodily limits. Trans scholars articulate that being constructed does not equate to being unreal, rather the opposite, and trans men frequently define themselves as self-made. So,the fantastic is never far from trans-ness, either because our alternative imaginary schemas necessitate it or because we are violently disqualified as literal and figurative space invaders.

Superimposed speculative figures, though, rather than undermining trans-ness, productively interrogate human artifice. A range of characters within science fiction known as trans-humans personify technological intervention in their merger of familiar physical characteristics with manufactured components. Trans-humans and packer users, both hybridized with the synthetic, face the dilemma of constructed-ness. Each shares prosthetic subjectivity—alternate ways of feeling in which flesh incorporates an object, undoing perceived “fakeness” by reversing what counts as real. Though speculative and dually object-mediated/media objects, trans-humans allegorize the ways trans humans can come with some assembly required, reminding trans men especially that fantasy is vital. Also bound to another kind of fantasy, packers remind us that a synonym for construction is erection.

Joshua Bastian Cole (he, him, his) is a Ph.D. candidate in the Department of Performing and Media Arts. An example of his multidisciplinary work,which spans transgender studies, disability and Deaf studies, theatre, dance,film, and television, can be found in the “Cinematic Bodies” issue of Somatechnics.