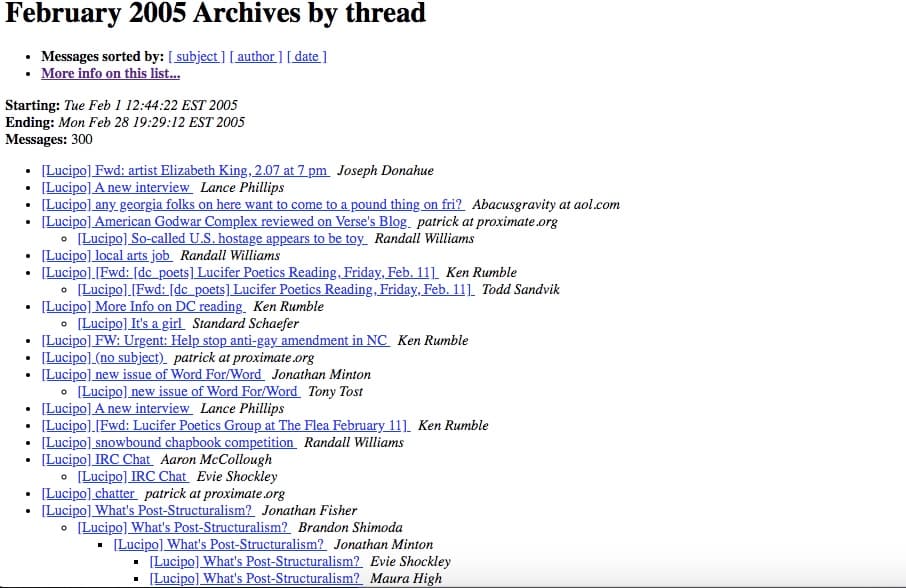 In 2004, a group of central North Carolina poets started an email listserv called "Lucifer Poetics," or, "Lucipo." It defined itself as follows:

An affiliation of people interested in contemporary poetry with an emphasis on avant-garde, post-avant, innovative, and experimental poetry. We discuss and share information about contemporary poetry and poetic events happening in central North Carolina. One focus of group efforts is our monthly meeting in which we read and discuss poems we have written and books we are currently reading.

In the 2000s, Lucipo was one of many poetry listservs that, responding to an increasingly professionalized academic poetry community, aimed to create its own site of poetic sociality outside the confines of the university. Hosted on UNC-Chapel Hill servers, but technically unaffiliated with the university, Lucipo's initial role was primarily organizational—to connect members of the preexisting poetry community in the Research Triangle, setting up meetings, organizing group potlucks, and extending in-person conversations. Unlike other poetry listservs of the aughts, Lucipo was unique in its regional orientation; its early conversations frequently circled around questions of Southern identity and literary history, and while the majority of its members lived within Durham, Chapel Hill, and Raleigh, many of its participants lived farther out in rural North Carolina. In the first year of its existence, the group collectively released a chapbook and organized a short tour of poetry readings. However, after receiving publicity on a well-known, nationally recognized poetry blog in 2006, the list's membership spiked, filling with poets from across the U.S. who were eager to participate in the group's conversations. Lucipo's initial regional orientation appeared to be fading, and by the end of the year, the discourse devolved into trolling, arguments, and general nastiness on the part of new members who had no affiliation with the in-person Research Triangle poetic community. In response, Lucipo's founder chose to restrict membership to North Carolina residents, kicking the majority of the new members off the list. Lucipo continued to exist as a lively forum for several years, eventually fizzling out around 2010.

Lucipo, I argue, is a provocative object in a media studies context for two primary reasons. First, it raises the question of what a regional literary community might entail in the age of the internet. Against the neoliberal tendency to view the internet as a transcendent release from material geographies, Lucipo serves as a persuasive example of an online space where regionalism maintained a significant hold – both materially and ideologically – enabling collaboration and sociality. Secondly, Lucipo serves as a case study in how a medium's socially determinative characteristics – or, as Lisa Gitelman would say, its protocols – might shape discourse. Like many internet technologies, the email listserv had its origins within both Cold War militarism and academic contexts, and was initially cloaked within the utopian neoliberal promise of eroding racialized, gendered, and geographic difference. Despite the fact Lucipo specifically aimed to create an inclusive space outside the academy, these deterministic qualities were precisely the tensions with which it struggled.