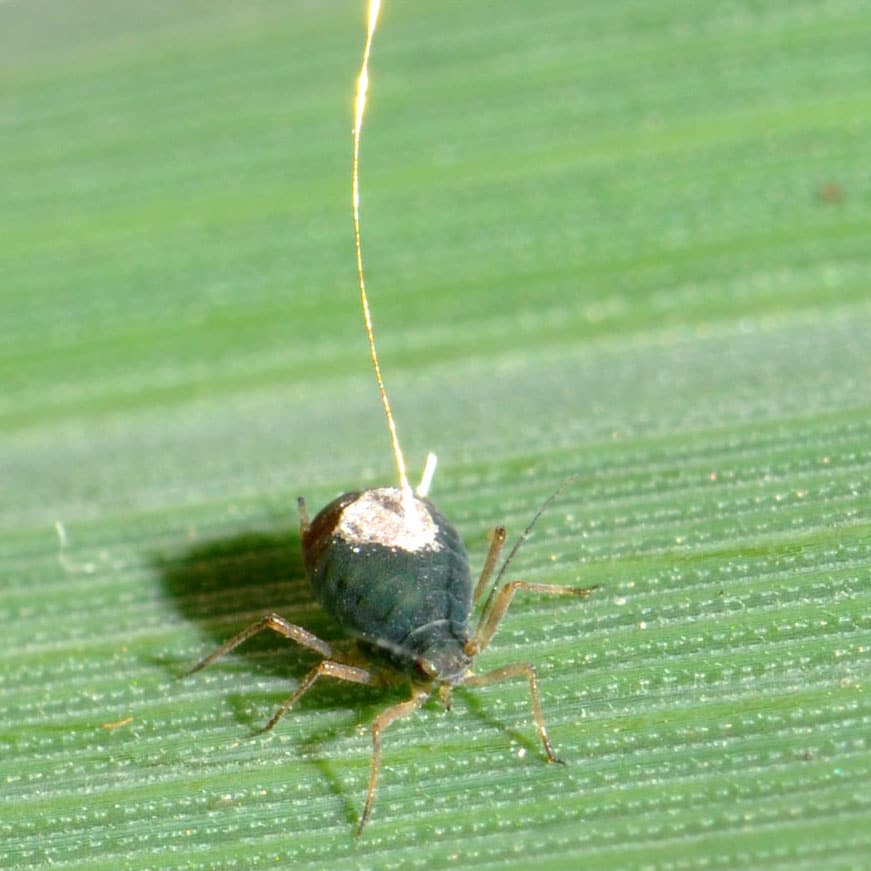 The electrical penetration graph (EPG) is a laboratory instrument widely used by entomologists to study how insects feed on plants. Here is how it works: You glue a fine gold wire to the back of an insect (typically an aphid), connect the wire to the plant the insect is feeding on, and then run electricity through the resulting circuit. As the insect probes, sucks, and salivates through the plant’s tissues in search of its sugary phloem sieve element, it causes the voltage to fluctuate in telltale ways. Invented in the 1960s by Donald McLean and Marvin Kinsey, two entomologists and amateur radio tinkerers at the University of California -Davis, EPG transforms the plant-insect relationship into an electrical circuit that can be monitored and recorded over time, with an aphid, whitefly, or leafhopper’s needle-like mouth-parts becoming a variable resistor that produces distinctive waveforms—a particularly literal example of what Jussi Parikka termed “insect media.”

As the industrial agricultural technologies of the “Green Revolution” transformed humanity’s relation to its food supply following World War II, military communications equipment and ideology restructured agricultural pest management in terms of control and surveillance. The early EPG systems used radio amplifiers made from surplus parts bought in bulk by the Heath company and re-marketed as kits for civilian radio “hams.” As a result, for a time, insect feeding behaviors were electroacoustic as well as biological phenomena. Until the late 1980s, when exclusively visual digital monitoring became dominant,entomologists were able both to observe insect feeding wave forms on a strip-chart recorder and listen to them in real-time via a loudspeaker. Having shed its vestigial transducer, however, today’s EPG can no longer speak.

Though hardly anyone remembers that EPG used to make noise, let alone what it sounded like, it is still possible to listen-in on feeding waveforms if one wants to. Plugging a cheap set of computer speakers into the monitor’s output yields a stream of alien rhythms. Guttural drones intersperse with syncopated popcorn and bottle cap plosives, audified articulations of the cibarial pump and precibarial valve, the alternating secretion and breaching of the salivary sheath, and the flood of ions from a pierced cell wall. When McLean and Kinsey devised their feeding monitor, they imagined it as a simple on/off switch, allowing them to precisely mark the beginning and ending of a simple feeding process. They got more than they bargained for: a menagerie of waveforms that left jagged ink traces on their strip charts and rattled their speakers’ diaphragms.

Modern EPG data has been both silenced and standardized, increasingly subject to automatic waveform recognition algorithms that short-circuit the sensuous role of the human operator. How to account for this sensory subtraction? Improved legibility in EPG data has arguably come at the cost of the instrument-insect-plant assemblage’s ability to tell its users things they do not already know. Un-silencing/resounding the instrument offers a re-medial intervention, a way of reminding researchers of the irreducible weirdness and unpredictability of an electrified aphid.

Owen Marshall is an NSF Postdoctoral Fellow in Science and Technology Studies at the University of California, Davis and a Visiting Scholar at Cornell. His work on the history and sociology of sound technologies includes forthcoming articles in the journals Social Studies of Science and Technology and Culture.