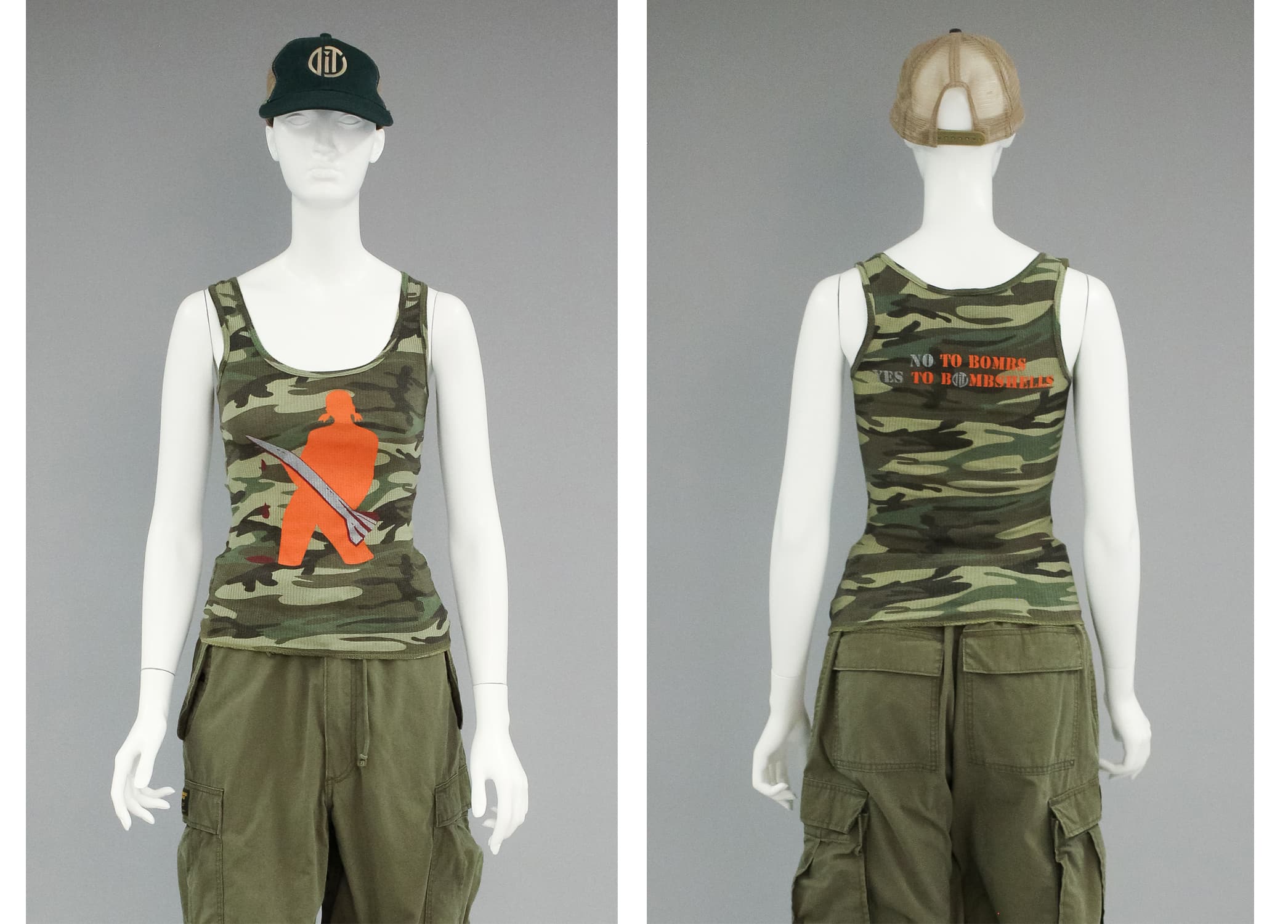 The now-defunct clothing brand Dykes in the City (DITC) was founded in 2004 by Nicky Cutler, a teacher turned designer who wanted to reclaim the pejorative ‘dyke’ by creating a brand that could empower lesbians to connect with one another and convey themselves through fashion. The graphic logo was vital to this process: designed from the acronym, DITC (with an upside-down triangle as the dot of the i), it quickly became an identifiable signifier in lesbian communities and appeared on everything from trucker hats to messenger bags, jewelry, the body (tattoos), sweatbands, and garments. In the media DITC was promoted in magazines like Curve and Velvetpark, and on television shows like The L Word and others that aired on the HER network.  The DITC tank top and trucker hat were worn together as an assemblage that conveyed political, aesthetic, and social sentiments of their time, and have since become an archive of identitarian aesthetics and identity politics.

The hat and camouflage undershirt-style tank top are from DITC’s 2005-06 “do ask, do tell” collection.  The tank top depicts a femme silhouette in pigtails holding a bomb dripping in blood, with text on the backside that reads “No to bombs, yes to bombshells” (the logo replaces the ‘o’ in ‘bombshell’). The design of this ensemble, and the larger collection that it was a part of, appropriated military aesthetics (e.g., camouflage) and inverted the language of “don’t ask, don’t tell” (DATS) official United States military policy (1994 – 2011).  By posing the literal opposition – “do ask, do tell” - the design employs the mechanics of counter-discourse, inverting the dominant form and rephrasing in the positive.  However, the design is also performing something more slippery and complex than inversion because it is not actually about a desire to allow LGBTQIA+ people to serve in the military, but instead a critique of the 2003 invasion of Iraq and subsequent military action.  Further, the “no to bombs, yes to bombshells,” at once cites and critiques the militarized gendering of ballistics, like the masculine codenaming of atomic bombs “Little Boy,” and “Fat Man.”  More than an inversion, the design and its visual-material signifiers are manipulating and re-appropriating terminology and aesthetics in the interest of political protest.

The DITC logo was the medium through which the pedagogical and political work of re-signifying the term dyke was done.  Typically, trademarked fashion logos are associated with capitalism, marketing, brand identity, and consumer loyalty. While the DITC logo is no exception, it performed additional political work as a rallying cry for queer reclamation and visibility in an anti-war context. However, the identitarian specificity of the logo—which had empowered the logo to do this political work—was limiting. The logo began to lose traction as the brand’s founder came to identify as transmasculine. “I began to question my own identity as a dyke,” Cutler explained in an interview. “I could no longer support the name of my own company because my own thoughts of myself had altered so much so I decided to end it after 2011.” What does it mean to archive dyke fashion, particularly butch fashion, amidst the current, insidious, and transphobic discourse around the “disappearing butch?” I acquired the DITC items for the Cornell Fashion + Textile Collection in 2006 with the hope of remedying lesbian erasure in this archive. Yet now, I wonder, how do we archive without making what we archive something that is “historical” – if we historicize butch fashion, how can we do so without contributing to the “butch extinction” narrative of transexclusionary radical feminists?  How might we all participate in a larger aspirational process of queering archives at Cornell, without rooting aspects of queerness in the past?